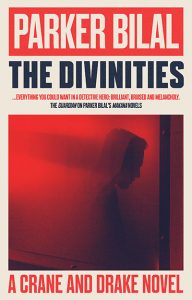 A Good Enough Mother is the debut novel from Bev Thomas, who was a clinical psychologist for many years. It’s a dark and gripping exploration of the complex dynamic between a patient and a therapist, and a look at the responsibility and limitations of motherhood.

“Taut, absorbing and psychologically astute, in A Good Enough Mother Bev Thomas combines all the tension of a thriller with the emotional resonance of a powerful family drama.” Paula Hawkins

The Divinities is the first in a compelling new London crime series from the Theakston Old Peculier-nominated creator of the Makana Investigations novels, Parker Bilal. He introduces the intriguing Crane and Drake partnership in this riveting novel with a London setting at its very core.

“A brilliantly written London Noir from a master of the crime genre.” Mason Cross